The NBA is made up of many different hairstyles and looks, each player with a different look when it comes to haircuts. But there are a lot of players who by no choice are bald. The statistics are surprising to some…

Players go bald for a number of reasons, whether by choice or genetics, there are many basketball players that are bald and that’s their style. It is an easy way to maintain their look and cost effective if you know how to cut your hair yourself.

Why do basketball players go bald?

It all comes down to genetics, the primary baldness gene is the X chromosome which comes from your mother’s side. While on the flip side of that is, if your father is bald you are more likely to go bald also. It is no wonder by the time most men reach 35 years of age that 65 percent of them will have experienced some hair loss. By the age of 50, 85 percent will have suffered severe or some degree of hair loss.

Now, these percentages are not just talking about being completely bald like Michael Jordan bald, but you yourself are noticing that you are losing some hair, that maybe others wouldn’t notice.

There is some research that indicates that working out with weights will speed up the hair loss and here’s why..

what is DHT in hair?

DHT stands for Dihydrotestosterone and without getting to scientific, this is the reason many men go bald in the world. High levels of DHT in the hair follicles will shrink them and shorten the life span of the hair. Their are supposed DHT blockers on the market. Who knows if they actually work…

There are also studies that suggest that working out with weights will boost DHT levels and speeds up the hair loss. While cardio actually promotes blood flow to the hair. These studies are very limited and are impossible to come to the conclusion that A or B is the reason for the hair loss without seeing the overall picture of the subject and their genetic makeup. Also discussed in the research that was brought to my attention is the excessive exercise may also cause hair loss due to the amount of stress that is placed on the body.

My brother started to go bald at the age of 27 and within two years it was to the point he needed to shave his head because it made him look like George Costanza from Seinfeld. I do remember he was working out a lot everyday during that time and feel it may have had something to do with it. He was also was  taking creatine in which many people have reported losing hair on the supplement. This could have been due to the intense training of weight lifting that the hair loss was the side effect and not the actual creatine supplement.

I on the other hand did not lose as much hair as him and still in my late 30s have a lot of hair, but am starting to slowly show signs. My father on the other hand is as bald as an bald eagle so I imagine I will soon get there but later on in life.

We all know what an NBA player schedule is like practice, workout, game, every day throughout a full 82 game season that lasts for a 7 to 8 months. While in their offseason there’s no rest to keep up with the competition, coupled with genetics the side effect could be hair loss.

Why are so many basketball players bald?

Keep in mind there is no cure for baldness, there are products on the market that don’t work and do work for people. But no indefinite cure for the annoying loss of your furry friends. If there was a cure I am 100 percent sure these million-dollar athletes would have found the cure already. Transplants may work and some athletes may have possibly have had one but that procedure is a whole different treatment on its own, So ill leave that up to the doctors to talk about that.

There are players in the NBA who prefer a buzz cut and are not going bald at all. Serge Ilbaka who I actually think he is starting to go bald now. Tony Parker, P.J. Tucker and Eric Gordon to name a few. It’s just the style they choose. It is possible they are going bald and they notice it but they have always rocked the buzz cut and don’t really care.

So when players do enter the NBA….

25 percent of players in the NBA who have the male pattern baldness gene will start losing their hair by 21, think Alex Caruso.

66 percent of players in the NBA by the time they are 35 many of which it will be apparent that they are starting to bald, think Chris Paul.

85 percent by 50 years of age will be noticeably a little thinner, think Doc Rivers.

When it comes to players playing in the NBA you will notice if you are an avid fan watching players from their rookie year to when they become a veteran in the league, they start losing a lot of hair. A perfect example of that was Kobe Bryant, he was a young star in the league who went from having an afro to rocking the bald is beautiful look by the end of his career. He accepted the hair loss and went with it, and it looked good on him.

On the other hand, you have Lebron who I think if he were to shave his head down to a#1 or #2 on his clippers and kept his hairline and beard he would look way better than hidding his baldness now, and maybe the hairline jokes would end.

The top 10 of history of NBA scoring are bald

It is interesting to note that seven of the top ten scorers of all time in the NBA are bald. Maybe being bald gives you some kind of powers in basketball, I don’t know, but you can’t argue with these numbers.

On the list, for most of their career Dirk Nowitzki, Wilt Chamberlain, and Elvin Hayes played with a whole head of hair. That is only 3 of the top 10. But I am sure you’re thinking Lebron has hair, well by the end of his career I am sure he will be in rough shape in regards to hair loss, cause he already is. 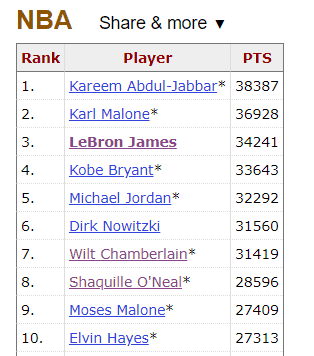 All jokes aside I am not serious that if you are going bald you are more likely to be a better basketball player… But if you take the 66 percent in this case we are pretty close to that number of players in the top 10 in scoring to lose hair throughout their career.

Meechi “Bald Head” Terry, is a rising high school basketball star, and I like this kid’s style. If you are thinking why doesn’t he just shave his head, I thought the same thing but what for? He is a walking attraction on the court. Not only can this player play basketball but everyone in the gym will first notice his crown on his head. Then he backs it up with his game. I am sure scouts will be calling him or they already have…. That’s one way to get notice

Why do NBA players shave their head?

The NBA has seen many trends through out the years and it is well known it just takes one player to rock a haircut or make a fashion statement and people will follow. In the 90s Michael Jordan rocked the bald head, while in the late 90s Allen Iverson rocked the braids. Being bald for many players in their early 20s is a choice but for players in their 30s it might not be and they shave it all off to hide the fact they are balding and they rock the new look like they own it.

I have had many hairstyles in my life time and I am glad I can rock long hair and short hair just incase I go bald or start going bald which I am slowly. I am losing hair around my crown and hairline but I know that I can always fall back on a bald head. I usually grow out my hair for the winter and shave it during the summer, I am able to cut my own hair so I do save myself money.

I can understand why athletes like Lebron can’t just shave it off, when I am bald I want hair and when I want hair I want to be bald. Hair is an extension of who you are and I am sure players and people around the world feel this way. When people lose their hair they feel they are losing a part of who they are, but your hair doesn’t define who you are, you as a person does.