English is a difficult language to learn for new speakers, one word can have many different meanings which can confuse those learning. Such is the case with the word “block” in basketball.

The word block has several different meanings in the game of basketball, the first is a blocked shot where the defense denies the other player from making their shot into the basket. There is also the blocking foul in which an official will blow their whistle when the defense stops the ball handlers progress using contact.

Yet, I have still not mentioned the shot blocker or the block that is part of the key on the court. I will go over each us of the word block and its meaning to clear any confusion there may be.

Block, blocked, blocking, and blocker which one is correct in basketball? Well, they all are. WHAT!

I know what you’re thinking how can this be.

The English language is a funny language, although spoken in almost every country the language is difficult to learn.

How can you blame anyone who gets confused when learning the language.

A cousin of mine who came to Canada from Portugal wanted to learn to speak English and although he spoke a little when he arrived.

Within a few weeks, he was already speaking English fluently where he was able to carry a conversation.

But what bothered him the most was that the language was: one word had many different meanings. 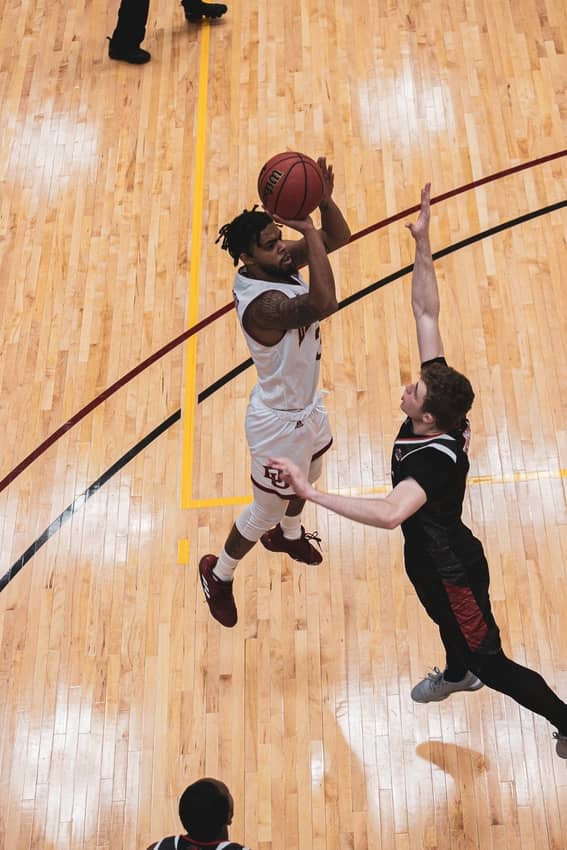 A blocked shot in basketball?

Blocking a shot in basketball is one of the most difficult skills in the game.

That doesn’t seem like a whole lot now does it. This just shows the level of difficulty for this skill.

A blocked shot is statistically counted when a player attempts a shot (must look like they are shooting the basketball) and the defender is able to deny the basketball by touching it with their hand/arm and prevent it from going into the basket.

The atttempted shot that was blocked does not count as a turnover but a missed field goal attempt for the shooter.

What is the importance of a blocked shot in basketball?

In basketball, it may be obvious that when a player’s shot is blocked it prevents the team from scoring any points.

The goal for any team if they want to win the game is to have more points than the other team by the time the clock runs out.

So, it makes sense that they have to prevent the other team from making more baskets than they do.

But shot-blocking is not just used to prevent baskets, but also for intimidation purposes.

If a shot blocker is stationed right underneath the basket and is very good at blocking or altering shots, many players will think twice about taking a shot around this player.

You can think of this as playing mind games between the player with the ball and the shot blocker.

Even if a player knows the shot blocker will be there when he enters the key or is around the basket they are already thinking about him beforehand and may shoot a shot they otherwise wouldn’t.

This is also considered altering the shot that the player truly wanted which may be to get closer to the basket but couldn’t.

Regardless, the further out a player shoots the ball the less likely percentage-wise of making it, this is what a team wants. 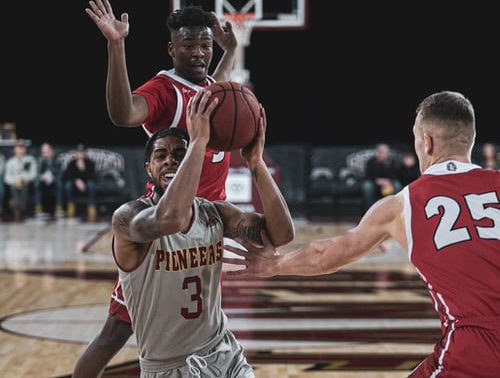 What is a blocking foul in basketball?

While some body-to-body contact is allowed in basketball, the defender must beat the ball handler to the spot by setting their feet.

This is to prevent the ball handler from scoring or getting past the defense.

A blocking foul looks as if the player is out of position with their feet moving and trying to get in front of the player to protect the basket but are unable to do so.

There is contact between the offense and defense leading to the blocking call.

The opposite of a blocking foul is the charge and involves the ball handler picking up the foul by running into the defender who has their feet set and isn’t moving.

Easier said than done when it comes to the charge.

What is the hand signal for the blocking foul in basketball?

The hand signal for the blocking foul is simple, the ref places both hands on their hips while standing erect.

It looks like a parent is standing in front of their troubled child who just spilled their milk on the floor, the parent has their hands on their hips disappointed. 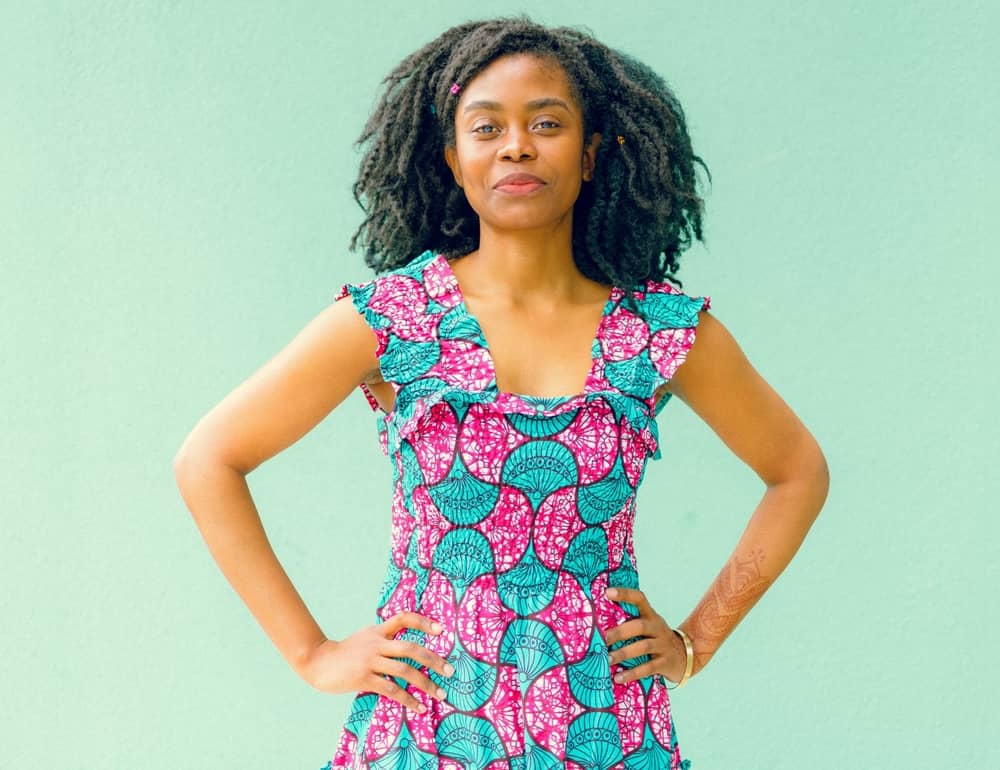 The block on the key

The meaning of the word block in basketball is also the key area. The key is 16 feet wide and 19 feet long.

On the outside of the key is where players line up when players are fouled and are shooting free throws.

Players use the lines on the key as a guide for where they are to line up at the free-throw line.

The low block is a small rectangular square that is used to indicate the position of where power forwards and centers will likely stand to look for scoring opportunities or get into rebound position.

This block is about 1 foot wide by 2 feet long. In some leagues players will stand on the block or next to the block when rebounding missed free-throws. 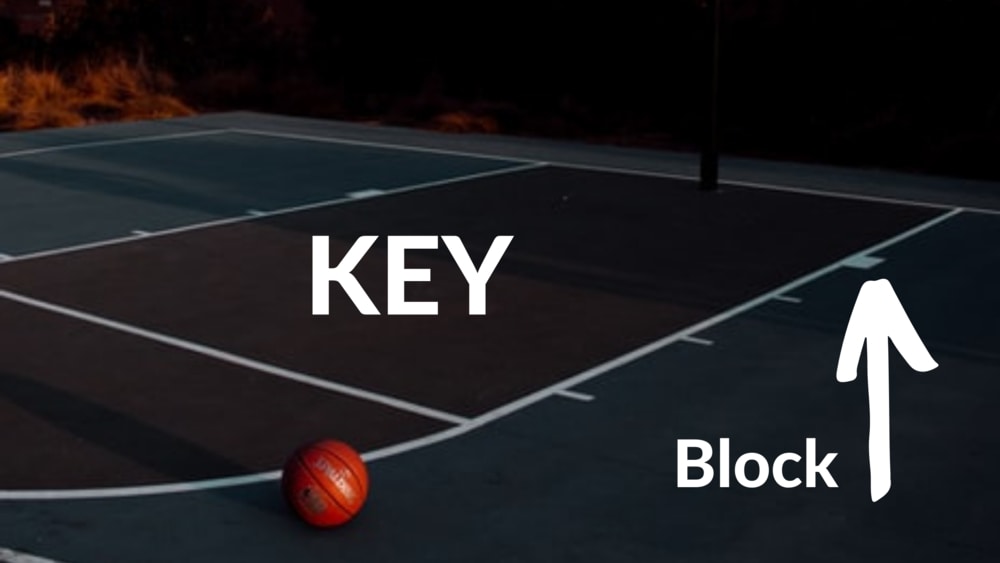 This covers all the use cases for the word block. Hopefully, now you have a complete understanding of each way block is used in the game of basketball.