Skip to Content
Often times playing basketball isn’t fun, especially if you can’t play the way you want to. We all experience nervousness as basketball players before a game, but if you are so nervous that you can’t shoot a basketball this may be more than simple nerves.
Why are some players scared to shoot a basketball? Some players are scared to shoot the basketball during a game due to lack of practice or experience, which results in being uncomfortable on the court. Their peers, fear of failing and themselves can also play a factor in preventing them from actually playing the game they love to play.
Hopefully, after reading this article you realize what you need to do in order not to be afraid to play the game of basketball and shoot the ball when your open. Basketball can be an intimidating sport but once you realize that it’s not as difficult as you think it is after bringing some of the issues to light, you will be well on your way to playing to your current skill. 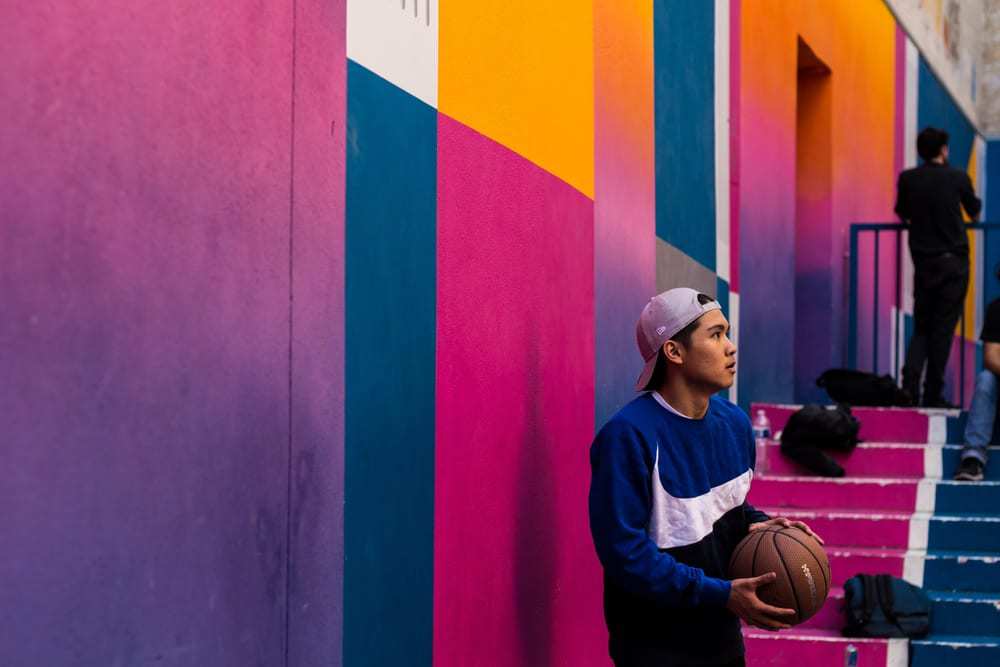 Difference between being scared and nervous before a basketball game?

I want to make sure that when we talk about being nervous and feeling a tiny bit of anxiety before a basketball game, this is completely normal and I believe to be a good feeling. Feeling a little nervous before a game puts the body in an alert state. This heightens the body’s senses and can benefit you in a basketball game.

Scared is not like nervousness, you may feel and actually look scared to the point your shaking in your basketball shoes. This is something that screams a lack of preparation (more on this later). Players who are scared are the type of players who look over to the other side of the court while warming up and see the best player on the other team and say I hope I don’t have to guard him today. This is not what you want to do in fact you want to do the opposite. These are the type of players everyone should take the opportunity to guard. Match up with them one on one. 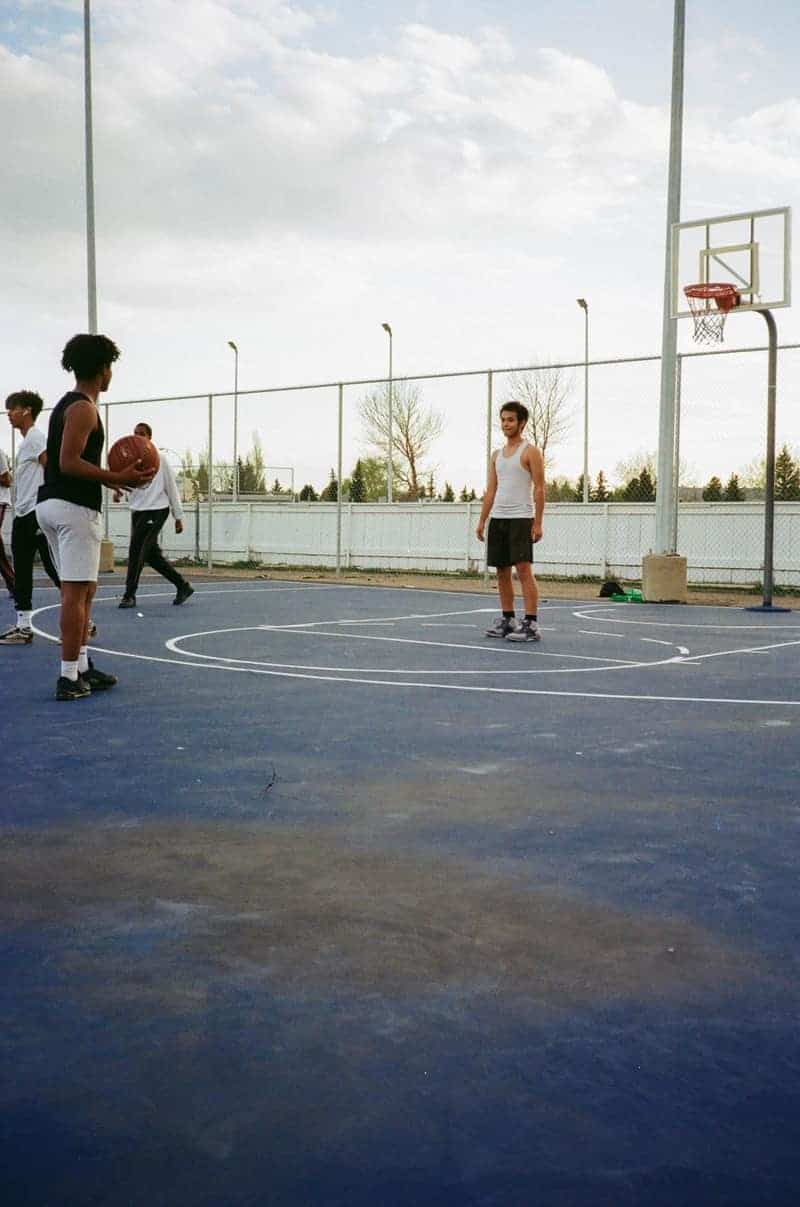 How do I stop being scared of playing basketball?

There are many reasons why basketball players are scared to shoot the basketball. Listed are a few reasons why and how you can overcome them. Hopefully, you will realize that it’s not as bad as you think it may be. Overcoming the things we fear in life is important in order for us to grow as humans. The body has an amazing way to deal with stress.

Playing basketball is a team game and we want to help our team win, while we also don’t want to let down our teammates or be the reason why the team loses a game. This can lead to anxiety when you’re on the court playing. You are in fear of not making the right play or disappointing your friends, that it’s hanging over your head and affecting your game. Maybe you are scared that the coach will get mad and sub you off and get embarrassed. If this sounds like you, how do you think things will get better if you are putting that much emphasis on the players on your team rather than the game.
As a basketball player, you’re going to make a lot of mistakes. In fact, when I coach I tell the players in a big game in which everyone is extremely nervous is do not worry about making mistakes. I say this because it takes the pressure off them, they think they are going to get subbed out if they turn the ball over or make a mistake. Players grow because they learn from their mistakes. You can make a blueprint but you’re still going to make mistakes. It’s the experience that is most important.
Get out there and play basketball, worry about nothing, and have fun. If players laugh because you did something wrong, laugh with them. Continue to play like you don’t give a care in the world…

Ask yourself this question, what is your goal in basketball or in life? Do you think you can accomplish that goal by feeling no anxiety, no fear, or no pressure? Good, you answered No!
Feeling nervous or feeling the fear of failure happens to everyone, those who can embrace it and not let that fear take over will succeed even if they fail. Wait…What? If you fail because you couldn’t reach your goal at least you tried, you can now take that experience and make the adjustments needed to try again and succeed. When you fear the very thing you are trying to accomplish, you now have to overcome the fear which is much more difficult now as you are not even giving yourself an opportunity to succeed.

You are your biggest enemy

You may not realize it until someone tells you, but you may be getting in the way of yourself. You may have beaten yourself up and not allow yourself a chance with your negative thoughts. This can hinder performance on the basketball court and in life.
Growing up I was one of the best athletes in school, but when things didn’t go right I was extremely hard on myself, in fact when I would play basketball it got to the point that whenever I would miss a shot I would remember it for most of the game. It was as if I put so much pressure on myself as to not miss a single shot. As I played, if I missed 2 or three in a row, it seemed as if I was having the worse game of my life. It wasn’t until I realized that this wasn’t the case at all after watching one of my basketball games and to my surprise, I played really well.
Some things that helped along the way were motivational quotes, I would repeat two quotes from time to time. “Shooters, Shoot” and “The best athletes in the world have a short-term memory”. Find what works for you, don’t be so hard on yourself, this will break the little confidence you already have.

Here is a simple thing you can do after every game to slowly build your confidence. doesn’t matter if you only play pick up this will work. Remember the mistakes you made and think about them only once. Then ask your self how you would have done things differently, what was the right play? Again only think about those mistakes once. Now in your head throw those mistakes in the garbage.
Now remember everything you did right on the court, you made the shot, you rebounded well, you stop the ball on defense etc. Keep replaying those plays over and over in your head as many times as you would like. You will get a great feeling from this and you will start to build your confidence every game. These are like positive affirmations that happened in the game that you can remember and build on for your next game. 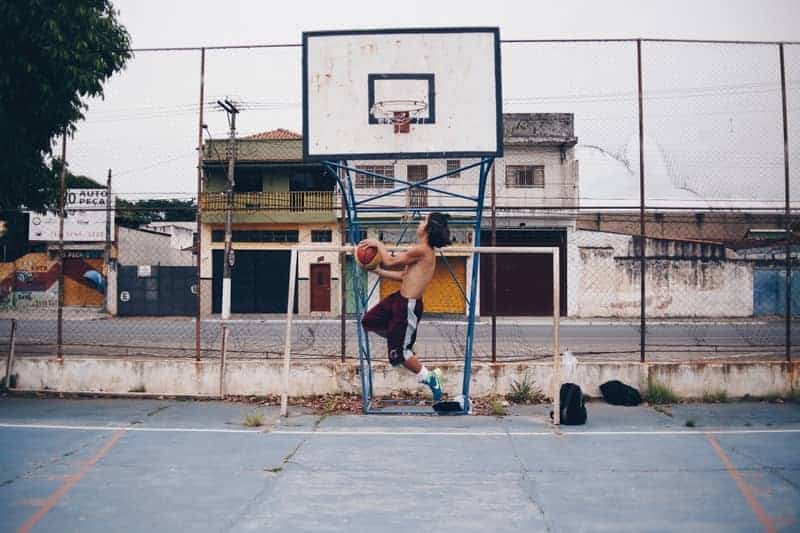 The secret to overcoming fear and anxiety in basketball?

I am going to give you the single best secret to overcoming fear and you’re probably not going to like it. But it is the truth. The secret is this “PREPARATION”… hear me out before you click away. Good basketball players fear nothing or nobody, but it wasn’t always like this for them. They overcame their fear through endless hours of practice and trying to be the best player on the court.
Ask yourself have you been practicing enough? Have you played against players better than you? Do you shy away from challenges that you know you would lose anyway? In doing so you are missing out on the one thing that is better in the long run than winning. That is EXPERIENCE!!! (okay….is anything better than winning???)
When you experience trials and errors, where it seems like you don’t have a hope in hell of winning, you still come out a winner.
If you really want it bad enough you would never need to ask yourself why you’re scared to shoot, your hard work and effort will make it so that you feel comfortable on the court rather than uncomfortable.
The reality is if you have feelings of anxiety and fear, I am willing to bet you haven’t spent enough time playing the sport of basketball.
Get out, practice. Put yourself in uncomfortable positions in order to succeed, if it was easy the game of basketball wouldn’t exist. If you find yourself complaining a lot about the game I am willing to bet that you have a lot of work to do.
In order to overcome any fear you need to prepare yourself to feel comfortable on the court, and that is through practice. 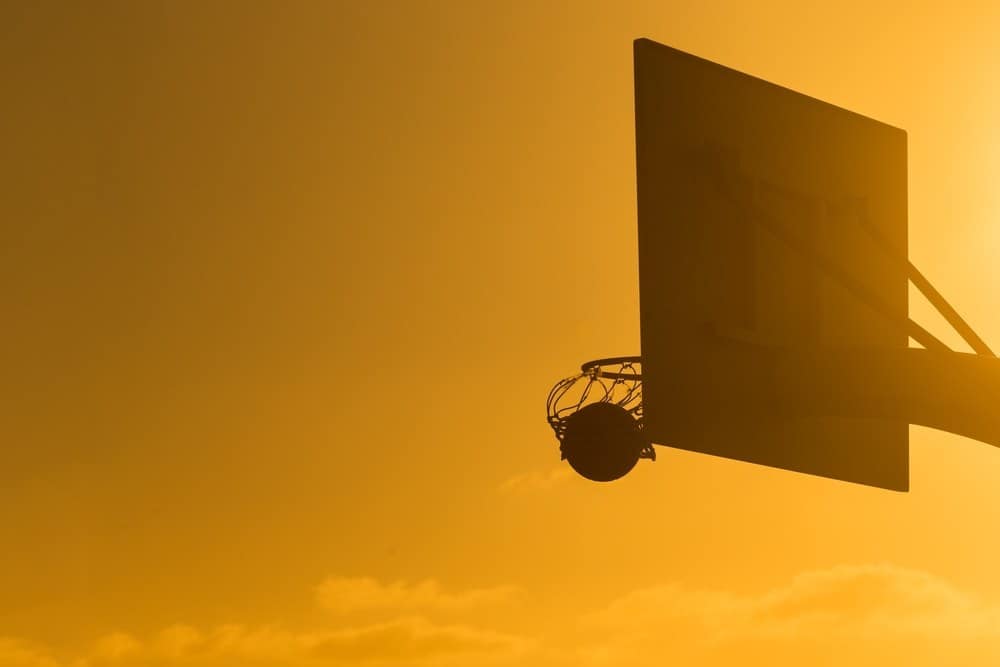 You need to play against the best basketball players and competition

If you reached the point where you are not as scared to shoot the ball, then as the title states you need to play against the best talent you can, playing the same guys in the gym can be detrimental to your game if you are trying to get better. I have seen this too often where players play at the same local gym with the same players on the same teams and wonder why they haven’t improved all summer.
I will always tell my players if you want to get better you either have to play at a gym or court with a lot of different players coming to and from the court or travel around the city to get to the courts with different player types. The type of competition from every court will be different but will go a long way to benefit your game. You will see how you match up with different players while it will also let you know where you stand and match up among the talent. This will be a kick in your ass to see how badly you really want to get better as a basketball player.
When I mean good competition, I mean players who are better than you but you can still compete. The last thing you want to do is play with players that will never pass the ball to you because they are so elite and think you can’t play.