BOOM SHAKA LAKA! One of my all-time favorite sports games was NBA Jam, I spent hours playing this game wasting away my allowance on the Arcade version. I was awful at it, but I know one thing is for sure, Nothing beats the original game.

What is the best NBA Jam game out of the series? The NBA Jam series consisted of 10 games made in the span of 18 years, while most will agree the game that is most popular and rated the best is the original NBA Jam that was released in 1993 through Midway on the Arcade.

If you were like me you love sports video games and loved the entertainment NBA Jam brought each time you played it. The game had hours of playability and seemed to never get old.

What is the best NBA Jam Video Game?

Nothing beats the original, not in movies or in music. Well, that’s just my opinion, but the original is where it all starts.

The sequel never seems to ever live up to the original game or movie. While the NBA Jam Tournament Edition was also a great game, it just seemed those that were hardcore NBA jammers if that’s even a word were in need of something new.

So we accepted it, and it did its job. But after those two games were released the NBA JAM series went downhill from there.

This is why I ranked the original NBA JAM as the best as it blew us away from the sounds, the duos and gameplay.

It really was an excellent game that you willingly gave your money to the arcade. The console versions of the game on the Super Nintendo and Sega Genesis were just as impressive.

I always found it funny looking back now how the arcade version of games prior to release on the consoles had much better graphics.

Then you realize years later how little computer power at the time the Super Nintendo and Genesis consoles barely had. 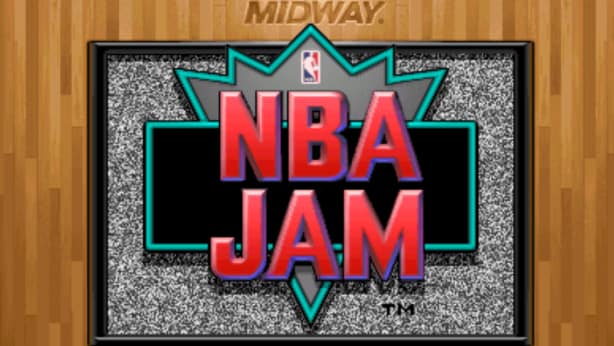 Why was NBA Jam So Good?

NBA was ahead of its time for a sports game, Midway the development company wanted to create a basketball game that would appeal to the masses.

Initially, when the NBA Jam was pitched to the NBA in order for Midway to attain the licensing agreement the NBA said no.

They were afraid the product didn’t exactly represent their brand. Eventually, the NBA agreed to give the Licensing to Midway and the game took off.

Tim Kitzrow was the commentator in NBA JAM and to this day I find myself saying BOOM SHAKA LAKA!, He’s Heating Up!, and He’s ON FIRE!!

These are Iconic sayings that never get old. The sounds in this game are repetitive but for some reason never gets old.

The console versions had secret characters which were amazing, as a kid the internet wasn’t mainstream and the only way to get these characters is to buy a gaming magazine or a game genie.

Such Characters you can unlock were:

The game had you play and compete through all the other 27 teams while difficulty increased after each team you beat.

The game provides hours of gameplay and has lasted us years. I still play it from time to time, it’s like an old classic song that never gets old. 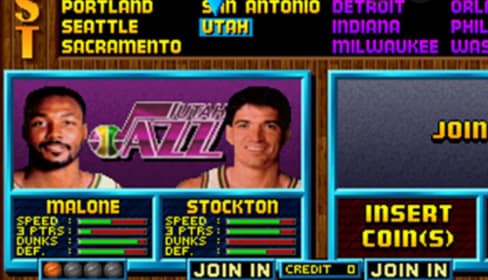 What is the best Duo in NBA Jam?

You would find out quickly playing the game that the best duo would be a guard and a big.

The guard needed to be a good three-point shooter and the big would need to block shots and rebound, everything else didn’t matter.

Any player could dunk in NBA Jam so you weren’t too concerned with that.

But I really do believe that Step Curry did in fact tailor his game to players like me who would play NBA JAM and just bomb three after three while my big rebounds.

This is why the number one duo in NBA Jam is the Utah Jazz with John Stockton and Karl Malone.

John Stockton could steal the basketball at will and drain the long-range three efficiently while Malone has overpowered defense and will block and dunk anything.

The honorable mention duo is the Indiana with Pacers with Reggie Miller and Rik Smits.

Miller has a high three-point shot rating and can knock down 9 out of three-point shots, while Smits has the height standing at 7 feet 4 inches to rebound and block shots on defense.

A case could be made for Charles Barkley, Kevin Johnson, and the Phoenix Suns but Barkley was taken out and replaced with Dan Marjle.

This is because Barkley signed a deal to make his own knockoff NBA JAM called Barkley’s Shut Up and Jam.

I remember going to the video rental store to rent this game thinking it was going to be better than NBA JAM only to be disgustingly be disappointed that I wasted my money.

That’s how bad this game is.

You don’t even play any NBA stars and Barkley was too overpowered from what I remember. That Game sucked.

Shaquille O’Neal was another player who didn’t appear in the next sequel of NBA JAM, Tournament Edition.

This was because he had his own terrible game called Shaq-Fu, in which as a poor kid I remember wasting my money renting this game and throwing up in my own mouth.

This was a fighting game that was put out by Shaq right when Mortal Kombat was already out.

Good luck with that.

Shaq-Fu is considered one of the worse video games ever, So much so that Shaq made another one a few years ago to overshadow the initial piece of crap that was released. It was released for the PS4, XBOX One, and Nintendo Switch.

How to break the backboard in NBA JAM?

To break the backboard in NBA JAM you need to jump from as far as possible from the hoop and dunk the basketball.

This can only be done in the second half specifically in the fourth quarter with a player with a strong dunking ability rating.

Some people believe it is totally random in the original NBA JAM. So if it doesn’t work for you it may be the case.

How to do an Alley-oop in NBA JAM?

When your teammate has the ball or the CPU when you are close to the hoop you press the shoot button. You do not have the basketball in your hand so this will make your character jump up into the air.

The creators of NBA JAM were actually Pistons fans and oddly enough the game was being made in Chicago.

The developers rigged the game so anytime you played as the Chicago Bulls and it went to the final shot against the Pistons the Bulls would always lose.

Fun Fact: The NBA JAM arcade was has sold 20,000 Arcade Machines and made 2 billion dollars to date in quarters. You can also pick up a 3/4 arcade of NBA Jam from Arcade 1up

How many NBA Jams did they make?

The NBA JAM series has been around since 1993 when the Arcade appeared in every mom-and-pop shop and Mall in North America.

In the last 25 plus years, there have been 10 NBA JAM games made for both Arcade and consoles alike.

The last NBA JAM that was made was a digital game for the XBOX360 and Playstation 3 called NBA JAM On Fire Edition.

This game just seems like a no-brainer and easy money maker but yet, there haven’t been any releases in over 10 years.

Why? Bring back the game, it is so easy to create new modes add players, and customizations. Wouldn’t it be awesome to create your own player and level up? 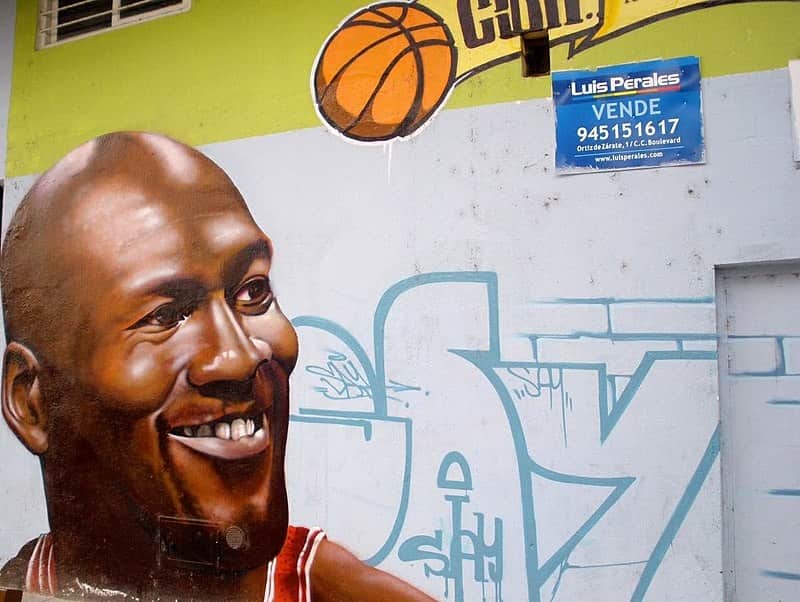 Everybody wanted to be like Mike in the 90s, but when you find out that there is no Michael Jordan in a video game you feel robbed.

Jordan was only included in the first initial release of the video game. But due to his deal with Nike Jordan opted out of his licensing agreement.

But where are the games with Jordan in it?

Here’s the kicker Mid-way the company that made NBA Jame only made 4 or 5 arcade cabinets with Jordan in the game and Michael Jordan got one of them.

Does Jordan still have it nobody knows?

If you want to re-live your childhood memories with an updated version of NBA JAM then the release of NBA JAM for Xbox 360, Wii, and PS3 is the way to go.

This game brought back so many memories, not only can you play against all other 29 teams but they packed with all sorts of challenges and game modes to keep you entertained for hours.

My favorite Duo is Pau Gasol and Kobe Bryant for the Lakers. If you have not played this game and have one of these consoles it is worth the 30 bucks to pick it up.

It really did remind me of the old version and plays really smooth. They made a digital version shortly but I wasn’t impressed.

This game definitely gets the honorable mention.