We have all been there before we go to a court or gym and we expect to play some pickup basketball with friends and strangers but no one shows up and you are left there all alone shooting on a hoop. Or maybe you have a basketball hoop of your own and you are tired of shooting around on it because you get bored quickly. So what can you do to make things fun and improve your basketball skills at the same time?

What basketball games can you play by yourself? There are a number of basketball games such as gauntlet, beat the pro, around the world, and beat your own record. These games help simulate game-like scenarios and shots you would experience in an actual basketball game.

In this article, I will list some basketball games that you can play on your own, work up a sweat, and have fun all while improving your basketball game at the same time.

Fun Basketball Games to Play Your Own

As a basketball player, you have shot what you believe to be hundreds of thousands of shoots on your own and you’re getting bored of the same old but at the same time, you are trying to improve your skill level when it comes to the team sport. You do shooting drills but also get bored and now you’re looking for something that will better stimulate your basketball ego.

Many basketball players want to be better shooters and do shooting drills but have no idea if they are getting better because they have no way to measure their progress. A good way to do so is by writing things down and tracking shots made and attempts taken. This is one way to measure success and see if you’re actually improving. Now here are some games you can play by yourself, and also track your progress. I bet some of these games you never heard of. 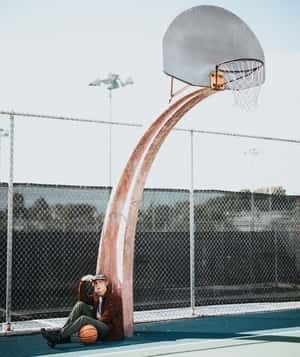 I came up with this idea that’s why you probably never heard of it. It starts off with levels of shots, anywhere from 1 to 5 levels with 3 to 5 shots at each level. The first level you would consist of beginner shots then you move on to the second level like a video game.  The idea is to move up levels and as you move up levels it gets harder and harder so you can do 3 levels 5 or as many as you want.  Levels going from easy to very hard at any point if you miss you have to start at the beginning. It will be a good idea to write down the shots you’re going to take in the gauntlet for each level if you miss in any of the levels you go back a level also.

If you really want to you can go from each level of increments of 5 feet further out, so the next level might be shooting around 10 feet. Again you can use any type of shots, and even trick shots to make it more fun.

Again I want to reiterate that anytime you miss you go back to level 1 or back to a level. Your fourth level might be two free throws and then three-point shots you can add trick shots in the fifth level such as behind the backboard underhand Scoops etc.

You can pretty much any type of shot you want with many different levels. You can also if you want, play it like around the world and give yourself one challenge on any level or one mulligan which in golf which means another try or attempt. When your friends do come around they can see if they can make it to a higher level than you. 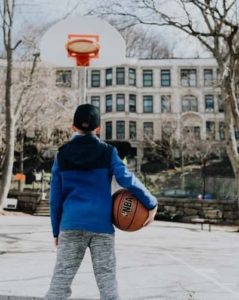 One on One/ Beat the Pro

So you want to imagine that you are playing one-on-one with someone better than you.  I always think of someone that I have played against that is better than me. That really gets me to try hard and put in the effort.  So the way this works is you are playing that person and you’re imagining that you were actually in a game with them but you aren’t allowed to do any layups, but work on shots that you would take in a game.

You must take at least two dribbles and anytime you miss the person you are imagining that you are playing guess that point. The game is up to 10 points if you make the shot you get a point and that’s how you keep track of the score.

You could also just do one move the whole game and work on that one move such as the pull-up jumper or take one or two dribbles and or taking 3-pointers with a couple of dribbles.

Another option that can be used are dribble moves such as a crossover or through the legs and then jump shot or reverse layups if that’s difficult for you. Again you play this way until either you win or the imaginary opponent does, You can really create any type of game like this.

Really simple concept and game, you’re setting a record so you can try to beat it.  Let’s say we’re shooting free throws and we make 5 in a row and then I miss. Our record is now 5 free throws in a row, Now we aim to beat our record by making 6 in a row if you make 6 keep going until you miss then that will be your new record. This doesn’t have to be just free throws you can shoot from any spot on the court and it can be a mixture of a series of shots if you want. An example is you can go free throw to lay up to three-pointer layup etc and counting how many makes in total.

Everyone knows how to play this game I won’t bore you with the details but if you are unsure of how to play click here and in the link is an article I wrote. Down at the bottom of the article is the rules for around the world. Decide how far first you want to shoot from, 10 to 15 feet or three-point line, etc.

So playing by yourself you will challenge after every missed shot once, you must make the next attempt after a miss in order to advance to the next spot. Or you start from the begging, also you can keep track of how many misses it took you to complete the world and try to beat that record.

Give yourself one challenge to go around and back.

Try making it around the world with no challenges at all. 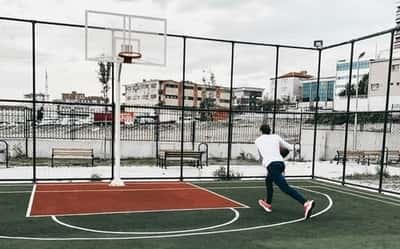 Horse by yourself might not be fun, but what you can do is create flashcards with different trick shots and layup attempts on the cards. Shuffle the flashcards and turn one over, the shot of the flashcard is what you must attempt and make. If you miss you get an H, if you make the imaginary opponent gets a letter.

Timed shooting is great to push yourself into a game-like mode where you are tired and it’s difficult to shoot. This will also help with when you are in a real game and you are shooting and you can feel yourself getting tired and making the necessary adjustments to knock down a shot when your legs are weak in the 4th quarter.

Set a timer on your watch or your phone for one minute, you can start at the free-throw line or three-point line hit and start.  Shoot the ball and run and retrieve the rebound now go back to the same spot. Keep doing this until you hear the timer go off, eventually towards the end at around 45-seconds you’re going to be tired and your legs will give up on you. You will notice you are going to have to focus on getting the whole body involved when shooting cause you will need more power, especially if your shots are falling short. Make sure you track how many you make and try to beat that record.

You could play 21 by yourself, how that would work would be the same as if you’re playing someone. Every time you miss you give two points to the imaginary player and if you miss from the free-throw line you would shoot from wherever you’ve rebounded the basketball. You certainly have to make double the shots you miss if you feel you’re a really good shooter you can up the points on a miss. 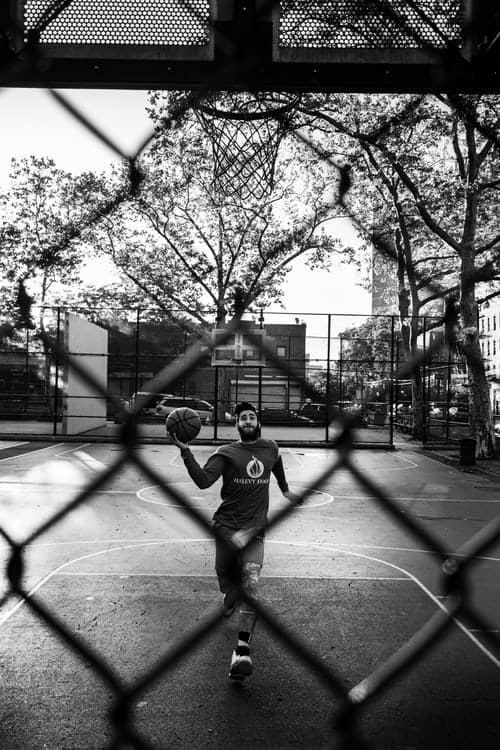 To close this out in order to fully grasp the idea of these games its important to play as if you were actually playing pickup basketball or an organized game. Now obviously if the game doesn’t call for intensity like a game of 21 you can relax.

But games like one on one or beat the pro you can increase the intensity by envisioning a player in front of you. Actually studies show that your central nervous system responsible doesn’t know if your in a real game or a fake one. Just like it wouldn’t know if you are doing a shooting drill or shooting an actual shot in an organized game.

My last suggestion is if you are getting tired and exhausted while playing set up time limits such as playing hard for 1 minute straight with game situation shots and then rest one minute. 30 minutes all out in a one hour period is better than shooting around for 2 hours and barely breaking a sweat quality of quantity.