Basketball may be the only major sport when a player falls down he is waiting for his teammates to help him get back up on his feet. But what is the logic in this?

Why do NBA players wait to be helped up by their teammates? Basketball players fall during the game for a number of reasons, taking a three-point shot, doing a layup, and taking a charge. NBA players wait for their teammates to help them up to their feet after falling because this shows teamwork, sportsmanship, and camaraderie. It is also a way for the fallen player to conserve energy not having to get pick himself up in the late stages of the game when energy is very low and exhaustion is setting in.

But why exactly do basketball players fall soo much in general? what’s the logic? Are some players more prone to falling than others? Is it common practice for basketball players to help their teammates up when they fall? All of this will be discussed further in this article. 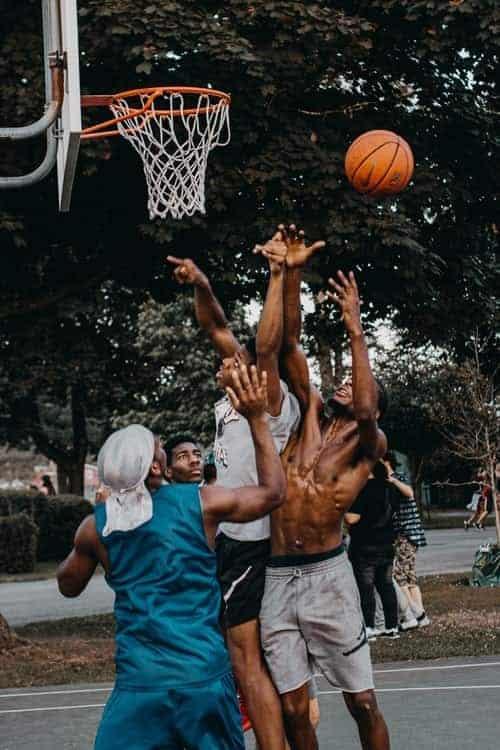 Why do NBA players wait for their teammates to help them up?

There are a number of reasons why players never get up themselves, this may be because this is something they are used to during their basketball career. It is a common practice among teammates to help each other up, this displays sportsmanship among teammates.

Some players will wait for their teammates for as long as it takes for someone to come over and help them stand up. Sometimes players will sprint to a player who has fallen to make sure they are not injured and are ok, they will help them up immediately which is not always a good idea if in fact that player is injured. Helping them up suddenly could cause further damage to the injured player.

Something you may or may have not noticed is that smaller players tend to fall down to the ground a lot more than the average player in the NBA. This could be because of their size while against a bigger player they are hit harder causing them to lose balance while falling to the floor. Smaller players are aware that they are taking difficult shots against the defense that it may put them in a position to be off-balanced while shooting against a bigger defender again causing them to fall in the process.

Anytime you fall, stay down…your brother will come pick you up.

Think back to when you played basketball, it’s the 4th quarter with one minute remaining and you are exhausted, you return to the bench on a timeout and have a seat. You take a drink of water, the timeout ends as soon as you sit down, so it seems. Now you have to get back up, you can barely get off the bench to stand up.

Every ounce of energy left in you that you can conserve during a basketball game is a good strategy, especially when your shooting crucial free-throws.

Why Do NBA Players Fall So Much?

There are a lot of reasons why NBA players fall so much, each player has their own reasons for it. At 5’9 I use to fall a lot also and it was just a way that seemed to work for me. There was no one reason why, such as trying to draw a foul or avoid injury, it was something that would happen. More often than not it was when I was mid-air and I was making a difficult shot while there was some form of contact. Here are some other reasons players fall and need help getting up.

The bigger they are the harder they fall, big guys, when they fall down it, it isn’t pretty. They definitely have a hard time getting up on their own, it kind of looks painful. When big guys are banging in the post, jockeying for position down low to score or play defense, there can be a lot of collisions and tangle ups between players. Big guys dont often fall to the ground but when they do lookout.

When a player makes an athletic play such as driving to the hoop and having to adjust mid-air by moving his/her body to avoid being blocked, this puts the player in an awkward position at times for themselves to land that most players just fall to the ground as it may feel safer.

Allen Iverson of the Philadelphia 76ers was a small guard who was barely 6 feet tall, pound for pound the most explosive player the NBA has ever seen to this day. But I am willing to bet Iverson fell more than any other player in their career, due to the nature of his style of play. He was facing players much bigger than him while also being doubled teamed. The defense would try to block the way below league average in height guard every time he went to the basket.

It was better for Iverson to fall to the ground and try to draw the foul. He was a difficult player to guard because he was able to maneuver his body mid-air in a way that would throw him off balance while inching his way past the defender while avoiding being blocked.

While we are on the topic of NBA legend A.I. another reason Iverson fell a lot was the number of times he would go up and get hit mid-air by defenders. Being only 165 lbs he could easily be bounced around by players much heavier and bigger than him while he was trying to make a layup. This alone would throw him off balance causing him to fall.

Drawing charges involves timing, being in the right position, and acting. Acting? Yup! Acting in basketball is necessary when you know your taking a charge it helps to lean back a bit when getting hit to absorb the contact while making a grunting sound.

Sure enough, I just saw Marcus Smart take a charge and on replay didn’t even look like the player touched. Call it flopping call it acting if you get the call it works to your advantage. Who am I to judge. Just another reason players fall to draw fouls. 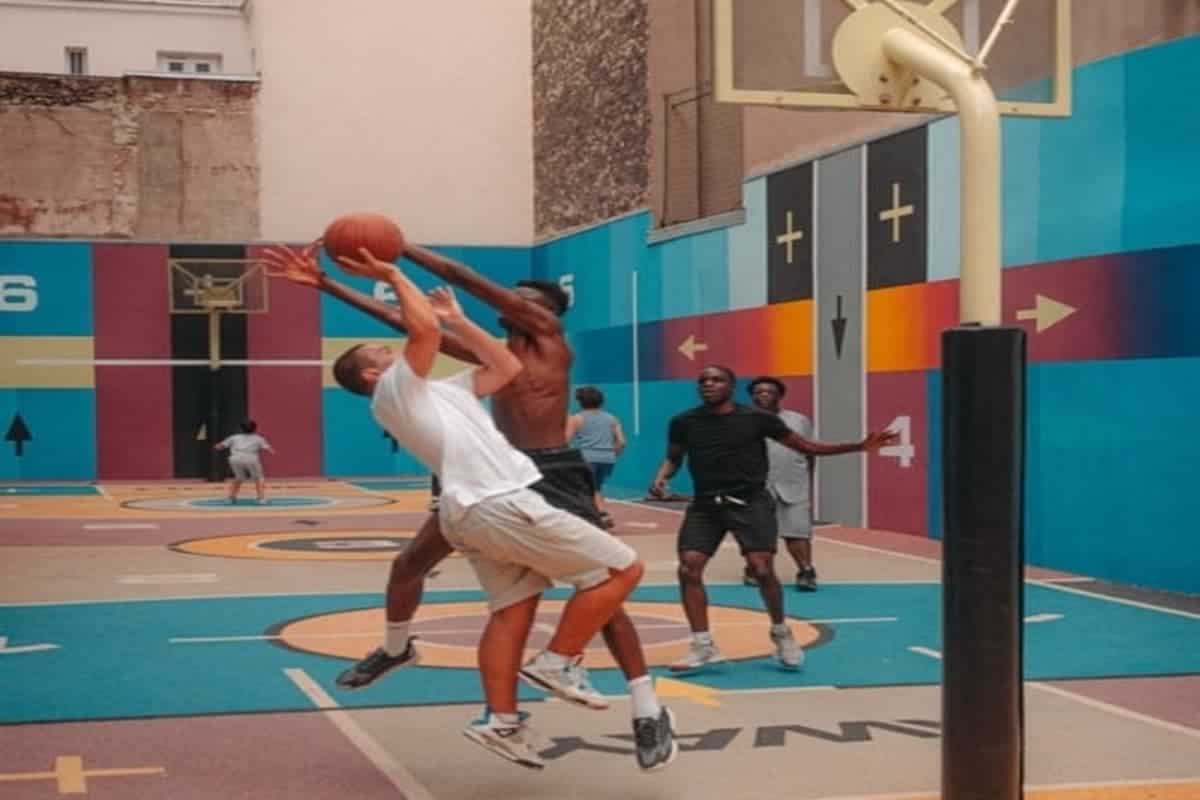 Why do NBA Players fall down shooting a 3 pointer?

Since the increase of the number of three-point attempts in the NBA, players more than ever will fall down shooting a three-point shot, but why? It’s really simple, they do this to draw fouls. Players know that a foul doesn’t have to be very physical in order to get a call. As long as the contact or play looks like a foul in question, they may get the call.

One of the first players to fall down and draw fouls from the three-point line was Reggie Miller who played with the Indiana Pacers in the 1990s. Miller was known for coming off screens and if the defense contested his shot he would kick out his leg towards his defender trying to draw the foul by falling down. You can bet he waited for his teammates to help him get up.

The NBA eventually had a problem with players kicking out their leg to draw contact with the defense in order to draw fouls. James Harden was very well known for this, especially that he has been averaging 10 plus three-pointers a game for a number of years with the Houston Rockets.

The NBA reviewed this tactic during the offseason and now it is considered an offensive foul for kicking out the leg. Fewer players fall to the ground then they use to which means fewer players need help getting up on their feet.

Players due tend to fall down but not for the reasons you may think of when shooting a three-pointer. As an avid basketball player myself, I have shot a number of threes in my lifetime, and let me tell you I also fall but based on instinct. Let me explain! If a player closes out on me hard I will fall, and it’s not to draw a foul, I just don’t want to land on his foot when he gets underneath me. It has happened to me before, landing on the player’s foot is a sure way to be out for a very long time with a sprained ankle or worse broken one.

Does falling help during a shot?

Falling won’t help you score more baskets but it definitely can help draw fouls, but the risk may not be worth the reward. You fall and fall and no foul calls eventually it is going to hurt more and more to fall. How much are two free throws worth to you?

If you are a player who drives to the basket and throws their body at the defenders but you are still losing balance, you can’t help but fall. This is probably your best option anyway to avoid injury or landing funny.

Falling won’t help you become a lights out shooter but it can be the difference from putting your body into a better position to score. By stretching out your body mid-air during a layup attempt in order to get those extra inches past the defender in a better angle to score, this can help, but cause you to be off-balanced in the process. Hope this helped to understand why basketball players fall and why they are helped up.