As NBA fans we often see players magically disappear from the league, we don’t realize the career span of an NBA player is only 5 years. Kwame Brown is a player that many want to know what he is up to in life.

Where is Kwame Brown right now? Kwame finished his career as a basketball player at the end of the 2013 NBA season at the age of 30 years old due to a career-ending injury. Later he would make a return to Ice Cube’s Big 3 league. He now runs a successful and highly entertaining Youtube Channel Kwame Brown’s Bust Life out of his home in the state of Georgia.

Kwame Brown was considered a bust in the NBA because he didn’t meet the expectations of what was expected of him as a #1 overall draft pick coming out of high school in 2001. So what happened? 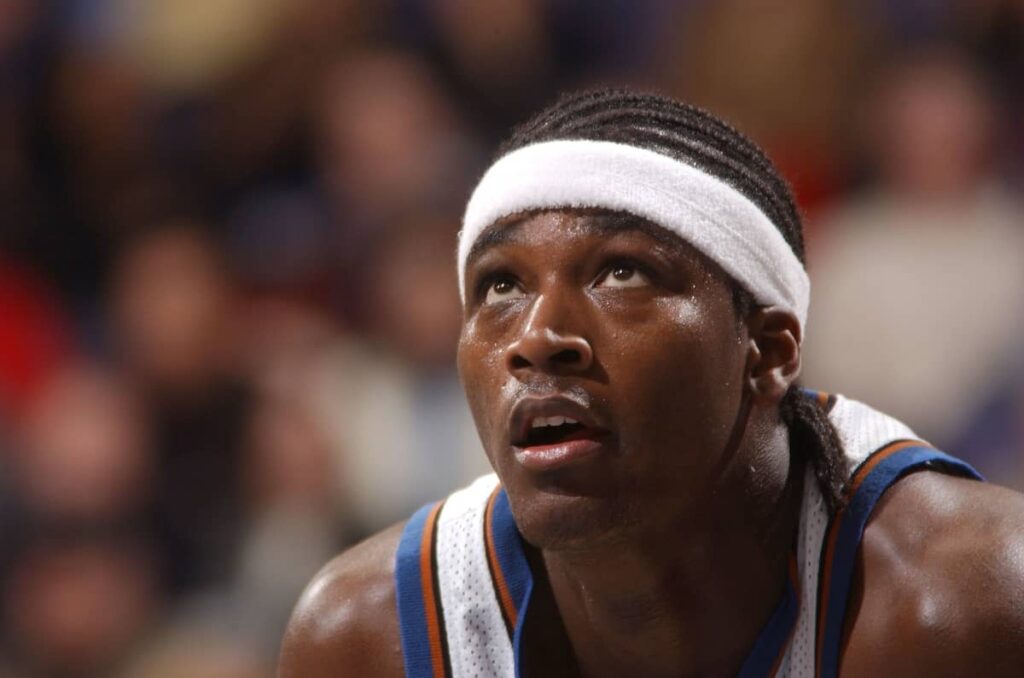 Who is Kwame Brown?

Kwame Brown was born on March 10, 1982, in Charleston, South Carolina. He was one of eight kids and his life was a struggle as early as he could remember.

Living in a broken home where he frequently witnessed his father abusing his mother, Kwame would up being in and out of homeless shelters.

When he was home police would frequently come to his house kicking in the door to find his brothers who were drug dealers.

Life as he remembered as a child was complete chaos. Trying to avoid trouble, Kwame turned to basketball and would be known as the best high school basketball player in the Nation.

But instead of playing college basketball, he opted to enter his name into the NBA draft.

What happened to Kwame brown?

Kwame Brown was drafted out of high school to the Washington Wizards in 2001 as the Number one pick by the best player ever to play the game Michael Jordan.

Imagine watching the best player in the world play basketball as a child and now being drafted by him and playing with him.

Kwame was on a natural high, things were starting to look up for him, he’s escaping the ghetto his dreams are finally becoming a reality. But at that point, it starts to spiral down from here.

Kwame and Jordan were now teammates, Jordan had high unrealistic expectations for Brown which he couldn’t match, and took it out on Kwame.

There were reports that Brown was bullied by Jordan and alienated by the other players on the Wizards team.

By Brown’s third year he slowly started to come into his own and shine, he averaged 11 points and 7 rebounds a game for the season.

But then injuries would strike, Brown never seemed to continue to improve or match his best year with the Wizards.

Brown would bounce from team to team and would find mediocre success playing with Kobe Bryant and the Lakers and ultimately many would view his career as a bust.

As he was the first overall high school kid to be drafted in the NBA and play with Jordan and Kobe.

How would you have done? That may have been too much pressure for anyone to handle.

After 12 seasons and a misdiagnosed hamstring injury that would end his career where he should be in his prime he called it quits from the game of basketball.

He blames the premature end to his career on an injury he sustained as a 76er.

“I had what’s called an avulsion fracture where the hamstring tears a piece of the bone away,” says Brown. “They were working me out every day, but they misdiagnosed me. They told me I had a mild hamstring injury. I was icing when I should’ve had surgery to pin it back.”

“They were working me out every day, but they misdiagnosed me. They told me I had a mild hamstring injury. I was icing when I should’ve had surgery to pin it back.”

Kwame was supposed to be in his prime in the NBA but instead, he was forced to retire. Still very young Brown had nothing but time to reflect on his career as a basketball player.

He fell into a deep depression, having to hear the world poke fun and throw jabs at him on every major sport radio or broadcasting show on tv and the internet.

Only in the limelight of talks about if he was the worse draft bust in NBA history.

Although he didn’t meet everyone’s expectations Brown was still able to attain the .03 percent.

That .03% is generous as 3 in every 10,000 College basketball players make it to the NBA. I say the .o3 percent because the odds are far smaller coming out of high school.

Although Brown may have been a bust the reality is he could have played in any other league and been the leading scorer. It happens all the time.

NBA players go play overseas and destroy these other leagues and be a star over there, but that didn’t interest him in his career.

Brown would pick up a basketball again and play in Ice Cube’s 3 on 3 leagues. In the Innagural season, he was drafted 5th overall in 2017 by the 3-Headed Monsters.

His coach was Gary Paton and played alongside Mahmoud Abdul Rauf and Rashard Lewis to name a few. Although in their first year as a team together they would make the finals but lose to a team called Trilogy. 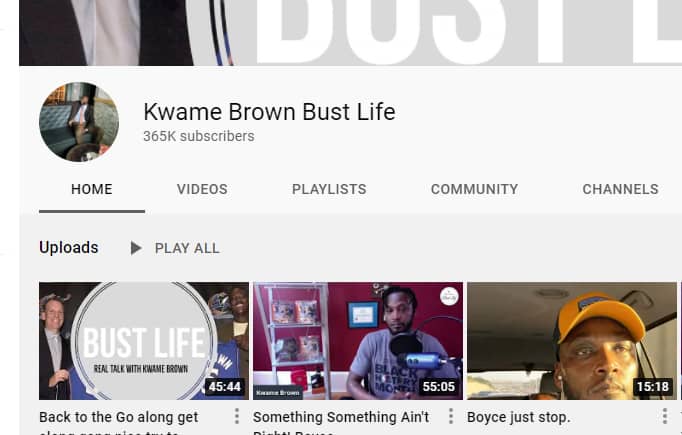 Over the years Kwame would constantly hear his name in a negative spotlight and how much of a bust he was in the NBA, most making fun of him fully knowing he would never respond.

Until one day he did…

Gilbert Arenas was on Stephen Jackson’s podcast called All The Smoke. Arenas and Jackson both made their bust comments about Kwame.

Kwame finally answered back. This one hit home to Kwame because these two players were his former teammates. Kwame got personal and made the smoke into fire so to speak.

Brown didn’t hold back and his Youtube Channel started to blow up because he started to use his voice to defend himself. Brown has a way of talking that when he speaks you listen.

It’s working for him, he has grown a huge following who support his views and aren’t even bothered by his career. (With over 300K Subscribers and counting).

But being drafted from high school is an unbelievable feat on its own.  I believe if he were drafted by another team initially he would have had much more success.

It was clear he had a ton of potential, and as a high school kid if your constantly being shit on that will make it very difficult to succeed in anything you are doing.

Brown couldn’t live up to the expectations of being a high school phenom that great players like Kevin Garnett, Kobe Bryant and Tracy McGrady could, but even they took some time to do so.

But was he good?

Good enough to buy his mom a mansion on the beachfront. Good enough to play in the NBA for 12 years and be bullied by Michael Jordan and not quit.

Good enough to average 6 points and 5 rebounds for his entire career in the best league in the world. Need I say more.

If you think that’s not good enough then 90 percent of the players in the NBA are failures.

If you want stats here’s one for you… In his per 36 minutes of play, KWAME IS ALMOST AVERAGING A DOUBLE-DOUBLE FOR HIS CAREER…..Surprised?? I was too…

Gary Payton is the perfect example of this type of situation that Kwame faced upon entering the league.

Payton and his coach K.C. Jones didn’t see eye to eye in Payton’s first 2 years in the league with the Seattle SuperSonics.

His teammates didn’t really like him either as they believe in everyone paying their dues, but Payton didn’t believe in that.

Payton almost quit playing in the NBA several times because he was riding the bench and hated the situation he was in.

It wasn’t until K.C was fired and Coach George Karl was hired that he flourished and started to transform into a Hall Of Fame player.

Like Payton, I believe Kwame hated the situation he was in and was probably trying to find a way out.

For a high school draft pick it is important to have the right coaches and teammates around you to elevate you in order for him to succeed.

His coach at the time was Doug Collins, it seems like every time Doug Collins gets fired or moves on from a team they do a hell of a lot better.

Kwame Brown stands at 6 feet 11 inches tall with a hand size that Brown himself thinks is small for his height.

It is rumored that he could not palm a basketball and that he had trouble catching the basketball because of his hands.

Official measurement is uncertain, but Kwame makes fun of his hand size on his Youtube channel and is said to have Large Women’s hands.

Is Kwame Brown Married with kids?

Brown’s hometown girlfriend Joselyn Vaughn is now separated but they have 3 girls together.

Does Kwame Brown have a championship ring?

Where is Kwame Brown From?

Kwame is from Georgia and played at Glynn Academy in Brunswick, Georgia.

How Good was Kwame In Highschool?

Kwame was considered the best high school player in his class and won the player of the year award in Georgia averaging 20.1 points, 13.3 rebounds, 5.8 blocks, 3 assists, and 2 steals per game.

Although his team’s record was 24-7 and only reached the semifinal in the Georgia State Tournament.

How much money did Kwame Brown make in the NBA?

Here is a breakdown of each year he played in the NBA and how much he made. 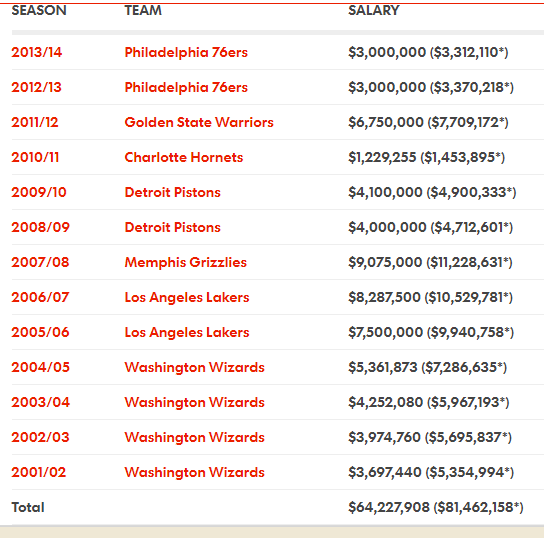 In total Kwame made 64 million dollars for his career, not bad for the bust life.