Mismatch, what are we talking about socks, an outfit. No, we are talking about basketball when a player is much taller than their opponent or much faster. But how is this used to a team’s advantage?

What is a mismatch in basketball? A mismatch is a basketball I.Q. play used by a team which gives them an advantage on offense when trying to score. This mismatch happens in several ways and takes advantage of a player’s speed, versus a player who is much slower. A player’s size and strength versus a smaller and weaker player.

Let’s take a look at some of the ways you may see and use a mismatch in today’s game, and use that to your advantage to score some easy baskets in the game.

What is a mismatch?

In basketball before the game starts players will walk from their bench to the center for the tipoff. Just before tipoff players are talking to their teammates as to who they will match up against on defense. The match-up is generally the player that plays the same position as them. They simply know based on their height or coach’s decision to guard a player.

When a player finds themselves no longer playing defense on the same player they were right after tipoff, this could be a mismatch depending on the skill and physical abilities of both players when facing each other.

There are many types of mismatches some small, some big. I will provide some reasons for and examples of two common mismatches you will see in a basketball game that gives a team a high percentage to score a basket.

The first mismatch is when a guard is being defended by a much taller and slower defender. Now usually this will happen when the defender is helping on defense and has no other choice but to guard the quicker player.

You see this when teammates switch checks on a screen and roll. The center on offense sets a screen for his guard at the top off the three-point line and the defense switches checks. The quicker guard is now being defended by a slow-moving center.

The guard has the speed advantage and will go one on one with the slow center blowing by them. Or the center will give them a lot of room as to not allow them to get by them, but this will give the quicker guard an open uncontested shot. 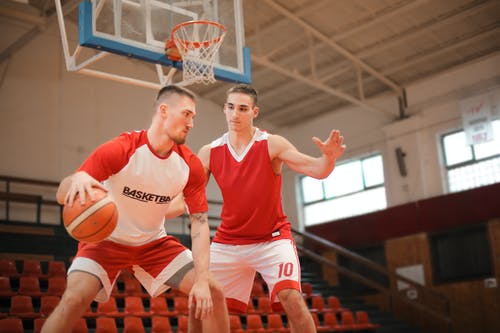 When a player recognizes a mismatch, it is a basketball I.Q. decision that gives their team the best advantage on the court at that particular time of possession. Just like a missed pass opportunity that could lead to an easy basket, a mismatch may only be available for a small window. This is why it is important especially for the point guard to be aware and call it out on the basketball court when he sees it, to let his teammates know to pass to the player on their team that has the mismatch.

link to Can Jumping Make You Taller? | Living Proof

There are a lot of wives' tales about growing taller. Stretching, hanging from a bar, and even pills. One such theory many believe in is jumping to actually make you taller? Yes! The act of...