Basketball can be a tall task to take on if you are a small player. The better the skill level you are playing, the taller the players you will face in competition.

How do you play against taller basketball players? There are a number of different strategies that you can use to gain an advantage against your taller opponent. Using your skill, ball handling, and basketball I.Q. will go a long way in competing against your bigger competitors. Being able to make the open shot consistently when you do get an open look at the basket is important as these opportunities become much more difficult for the amount of space a taller player can gain when compared to a smaller player.

Using a variety of the tips listed below will help you score more points and play better defense on the players you come across who have the height advantage. These tips will help you outsmart your taller opponent and help you realize what you need to work on to help you at the next level. 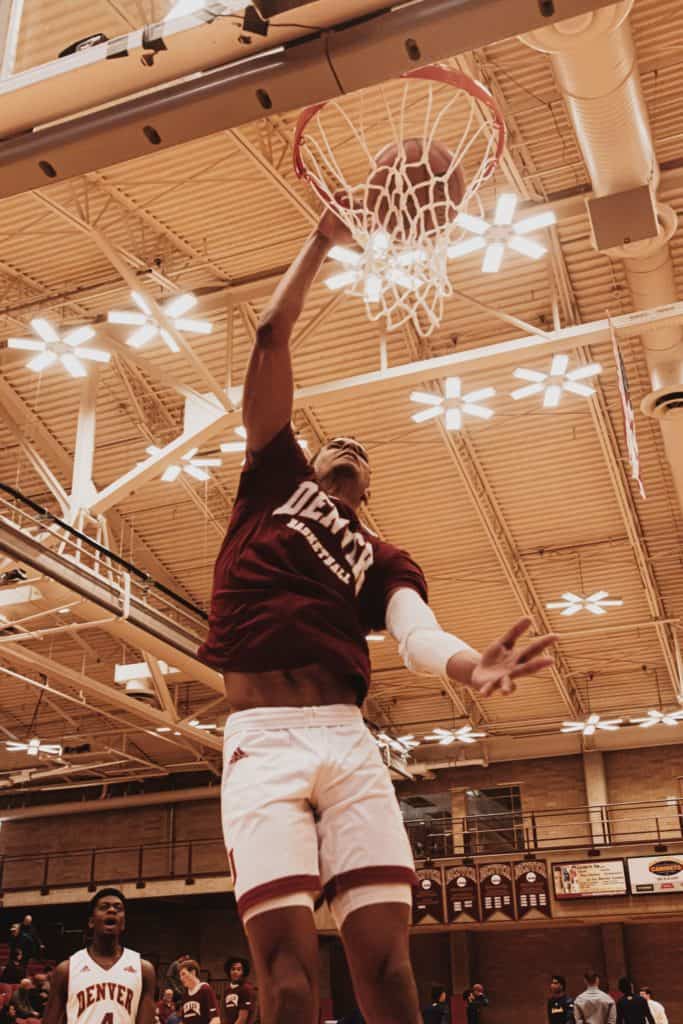 How to score over bigger defenders?

You may have played against players that are much taller than you playing the same position. You realize while your playing you are finding you are having to adjust to the taller players and bigger talent. Basically the better you are, the better the competition you will face, the better competition is always taller in basketball. This means you are going to have to be an excellent ball-handler and shot-creator to be able to score on taller defenders.

Smaller players need to have an advantage and that is the ability to have the ball on their hand like a string. Now that doesn’t mean you absolutely need to be able to cross players up like Kyrie Irving, but it does mean your ball handling has to be polished. The times you do get an open shot, you need to be able to make the shot with high accuracy.

Players in the NBA who are 6 feet and under are not like their taller competition, they have to stand out in a way that makes them taller than their actual height. This means they have far superior strengths in their game that stand out among other players. Usually, this is speed, ball-handling, and a consistent jumper.

How to get past taller defenders in basketball?

The truth is the smaller you are when compared to your opponents the quicker and more skilled you need to be, period. A taller player guarding you can afford to be the slowest guy on the court if he is long in stature. The player can get to where he needs to be on defense using his length to his advantage.

Having a great jab step with some fakes is necessary to be able to blow by the taller defender. In some cases it may not be enough to just get past him if he is trailing behind you ready to block your shot from behind when you attempt a layup or shot.

Taller players love to jump and block shots especially when the player they are guarding are smaller than them. This is a great opportunity to pump fake when you are in a triple threat stance to get them off their feet. Anytime time you can get them of their feet you are going to be able to get an open shot off if you follow the pump fake with a dribble towards the basket.

This can be in transition, in which you are pushing the ball down the open court.
When you receive the ball on the outside and the defense is trying to recover.
Taking advantage of the speed vs size mismatch at the top of the 3 point-line.

These are just a number of examples of when you can find the opportunity to score. look for these opportunities on the court, they are the same every game. Find your advantage, don’t play the game aimlessly, but actually think. 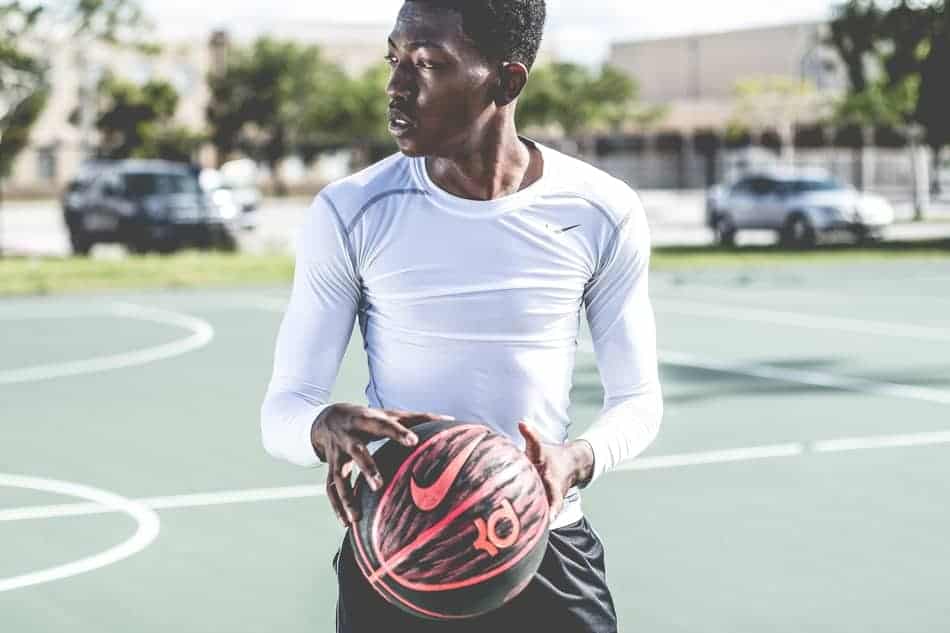 How to Finish Over Taller Defenders?

Smaller players have had this happen to them often, they are one on one with a much taller player who is meeting them at the basket. They go up for a layup, only to get the ball blocked viciously at the rim. What did this player do wrong? They didn’t finish high off the backboard.

High of the Backboard

Finishing high off the backboard is necessary against taller opponents to not get your shot blocked. Not only will you not get your shot blocked but your shot will not be altered either. When you shoot the basketball high off the backboard your giving yourself more space between you and your defender to shoot this type of shot. When shooting the basketball high with your right hand you will need to shoot it over the right corner of the layup square, this height can be between the top of the backboard and the top of the square. Somewhere in this middle is where you can aim for.

The top of the backboard is thirteen feet and the op of the white layup square on the back board is 12 and a half feet, you want to shoo the ball high when you lay it up between those two heights or more specifically between 12 feet and 12 and a half feet.

You must be able to use your body well on offense, if you as a smaller player this will help create space while protecting the basketball at the same time. If you are not doing this, your at a disadvantage as the bigger players will naturally over power anyone who is weaker then them, based on instinct alone.

There will be times where you will be hip to hip with your much taller defender and the only way your going to get up a shot is to use your body to do so. The best way to do this when attempting a layup is to think of using your body to push your defender underneath the basket while your able to get the layup off. This will not only help with avoiding a block but also drawing a foul in the process. This may require hanging in the air for a brief moment or picking your dribble up deeper in the painted area.

Basketball is a physical game, and as a smaller player you need to work on being able to use your physicality to your advantage on offense while also not shying away from it on defense. Player will take one look at you and think they can power through you with ease, unless you stand your ground and play physical defense yourself.

The closer you get to the basket and shoot the softer the touch needs to be when you release the ball this is why players use floaters. Two foot floaters are much more controlled an much more accurate then one foot.

This is a skill anyone can develop especially smaller guards. This is crucial to add to your game in order to score when meeting taller players just before the rim. The ability to beat your defender to the spot in front of the rim and shooting a floater is a high percentage shot. Shooting a 5 to 10 foot floater will help you get 4 to 6 points a game if you can make this a go to move.

Taller players who leave their man to help when you attack the paint to shoot a floater, this will allow you to drop a pass to your big man down low. The floater is a very difficult shot to block as it is a quicker shot and is very hard to time your jump to block as a defender when the player is shooting the ball. 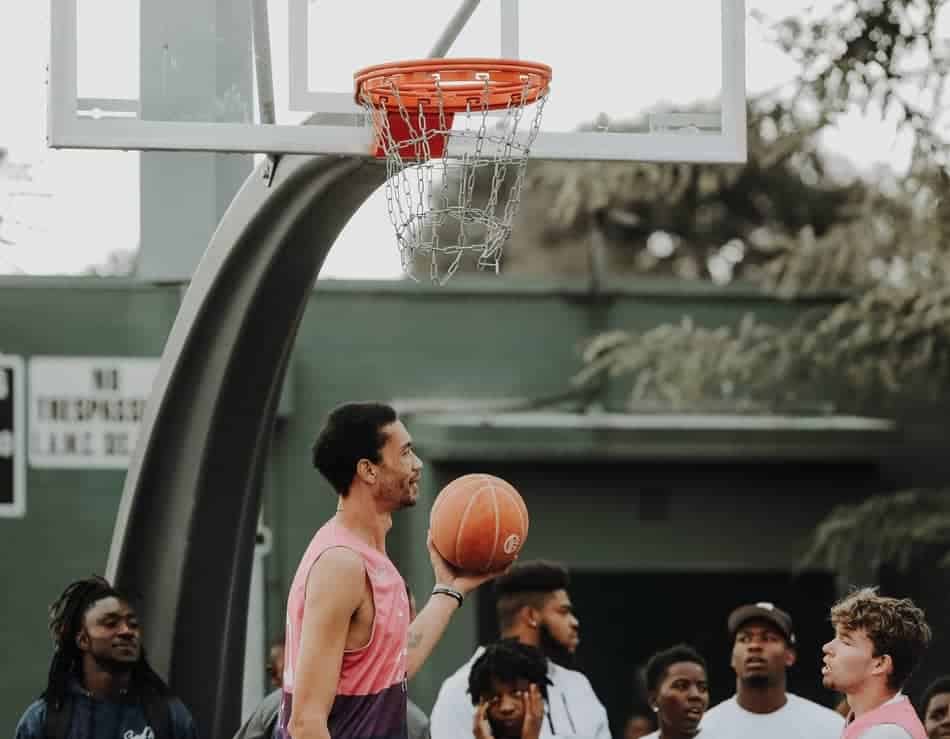 How to shoot over taller defenders?

If you are already a pretty good shooter this will immediately work to your advantage. Tall basketball players in general love to block shots, especially against their smaller opposition. Being able to shoot and a make a shot, or if the player knows you can shoot will be a big advantage to you. Whenever you do get the basketball you want to pump fake him hoping that he bites just a little bit. If so you can one-dribble pull up or get to an open spot in front of you and shoot. The pump fake especially works just after a made shot as the player thinks you want to shoot again and you do want to but only when your open.

The step back is an advance move. I only recommend this if you have good basketball shooting mechanics. If you don’t know how to do a step back here is a video that can help.

How to guard a big man in basketball?

When we talk about big men were not just talking about height but a player that is playing in the post and you are guarding that player. This may happen due to a mismatch or switch. It is extremely important to make it difficult for the post to receive the entry pass from the wing. This can be done by going from protecting the basket to three-quarter fronting to fronting the player completely back to protecting the basket. I would do this quickly, so the entry passer has to guess where you will be. You must not allow the post to seal you, he can’t seal you if he isn’t touching you so you may need to take a step back and as he backs up with you you can front him.

When there is a mismatch let your teammates know and have the wings deny the entry pass, you can also front completely hoping weak side defense helps.

How to guard a taller player in basketball?

The advantage you have over a taller player would need to be quickness and speed in order for this to work. When playing defense you really need to be in the player’s bubble making it very difficult for this player to dribble and get a shot off over you. This will require you to be aggressive and being a pest in the process, frustrating your opponent so that he is unable to do what he would like on the court. This is called hard nosed in your face defense.

Form time to time take a charge this will also frustrate them. When you are able to shift the player from comfortable to uncomfortable they tend to do things that are not apart of their game. Such as shooting from further out, dribbling too much, and taking bad shots.

link to Am I Too Small To Play Basketball?

Continue Reading
link to Can Basketball Make You Taller? What The Science Says