Dunkers are getting more creative and jumping higher than ever. When jumping 50 inches seemed impossible many pro dunkers are able to do so.

But has anyone dunked on a 12-foot basketball rim? Yes, Michael Wilson who played for the Harlem Globetrotters has the record for the highest dunk ever. Dunking a 12-foot rim off two feet, he is the only player where the rim was measured so everyone could see that it was in fact 2 feet higher than a regulation rim.

There have been other players who have claimed that they have dunked on 12 feet, we are going to take a look at these claims and examine if, in fact, they are true. 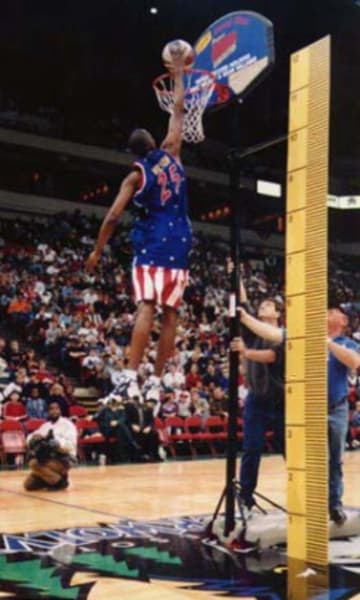 How high is 12 feet actually?

If you look at the backboard we can see the white-painted lay-up box is eleven and a half feet tall (11’6).

Michael Wilson known as the “Wild Thing” was a basketball player who played for the University of Memphis before playing in the NBA for the Memphis Grizzlies for one season.

Wilson would take his talents to tour and play with the Harlem Globetrotters. This is where he set the 12-foot record.

As we already mentioned Michael Wilson may be the only player on record that has actually dunked a basketball on a 12-foot rim.

He did this during a dunk competition on April 1, 2000. No, it wasn’t an April fools joke.

The record still stands today as the highest dunk in the Guinness Book of World Records.

Wilson’s vertical was measured at 52 inches standing at a height of 6 feet 5 inches tall, with a reach of 8 feet 3 inches or 99 total inches.

Some dunkers lie about their vertical but Wilson’s numbers are accurate as he was tested at the University of Memphis with a 52-inch running vertical leap.

This gives him enough inches to be able to accomplish this feat.

The official dunk was an alley-oop from a teammate making it a little easier to make the dunk when compared to dunking the basketball on his own.

You need fewer inches to dunk a basketball off an alley-oop than when you attempt a dunk on your own without one.

His claim to fame is that he can jump really high at a height of 5 feet 9 inches tall, and I wouldn’t doubt he had close to 50-inch running vertical in his prime.

I actually was a subscriber to his channel until one day he posted a video of himself dunking on what was supposedly 12 feet.

I didn’t have an issue with it until I did the math, more on this later.

In the video you see him raising the hoop and measuring it with a tape measure. I thought to myself, he is the same height as me with probably the same reach, no way he can pull this off.

But he did. If you are wondering about the tape measure, it wouldn’t be hard to cut off 2 feet and reconnect it, case closed.

Dunk a basketball on a 10-foot rim

At a reach of 7 feet 4 or 88 inches My vertical would need to be close to 40 inches to dunk. I am giving myself at least 8 inches to dunk a basketball give or take.

In my prime I was able to miss dunks off self-lobs, measuring my vertical in the high 30s. $0 inches would have definitely had me dunking in my opinion.

Dunk a basketball on an 11-foot rim

You can already see where this is going. But could Dexton dunk 11 feet, I actually think he probably could and should have titled his video to 11-foot dunk.

I do think the dunking community probably wants no part of his claims as I have not seen him dunking with his former friends in the past couple of years but this could be due to covid.

Dunk a basketball on a 12-foot rim

Lastly, in case you forgot my 88-inch reach, to touch a 12-foot rim, I would need a staggering 56-inch vertical jump. To dunk the basketball we are talking 64-inch running vertical jump.

The claims of Dexton are bogus for sure, even if he had an 8-foot reach which is 96 inches. To touch the rim would require 24 inches, which would mean he would still need 56 inches to dunk the basketball.

But standing at 5 feet 9 inches it is very unlikely he has this reach and if you want to take off an inch because of his shoes by all means, and if you think it doesn’t take 8 inches I disagree.

But even at 6 inches over the rim were still looking at almost high 50’s into 60 inches.

Dexton’s Claims are insane but he has a lot of younger fans believing the hype, to each their own.

I think he makes great videos and is entertaining, as long as he has people talking he’s doing something right. 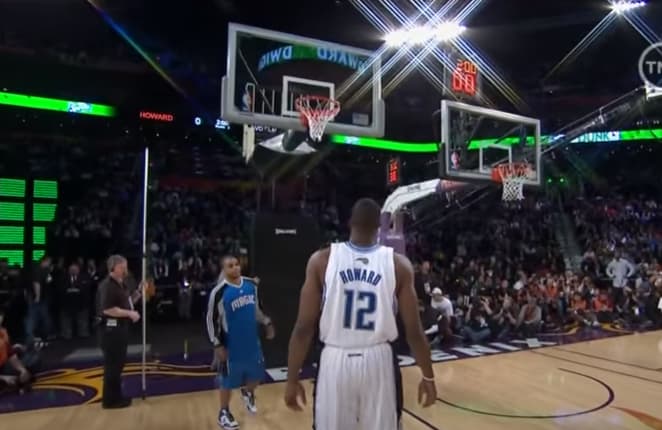 Dwight Howard who played for the Orlando Magic attempted what was believed to be a 12-foot dunk at the NBA dunk contest in 2009.

He dunked on 12 feet off an alley-oop from a teammate off the backboard with a two-foot jump and two hands. It did it fairly easily.

There were two basketball hoops side by side and you can tell that the hoop wasn’t 12 feet. When you line up the rim to the standard 10-foot hoop it appears to be level with the layup box which is 11 and a half feet high.

Rumor has it the NBA would not allow Dwight to dunk on the 12-foot rim. While I do believe he could have done it as he did so on the 11-foot 6-inch rim without even trying.

I also believe that most dunk competitors understand what they are capable of and are not going to attempt a dunk they have no idea they could make.