Often we see players who are attempting to score a basket draw contact at the same time. They hear the whistle blow and flex as the ball goes into the basket yelling and one. The ref doesn’t always blow the whistle in most cases unless it is an obvious foul. But when it does happen it’s a very exciting play due to the difficulty involve to make the basketball in the process of being fouled.

What does an “And-One” mean in basketball? And one in basketball is a term used to describe a player who is fouled in the process of shooting the ball and making the basket. The foul is called by the referee as the ball enters the hoop. The player will then go to the line to shoot one free-throw, to complete the three point play.

To clear up any confusion, let’s take a look at some examples of what an And-One is and how players try to draw fouls from a strategic standpoint.

The And-One can happen on any shot attempt in basketball, as long as the ball goes into the basket after the foul is called. Technically it is not an And-One when a player shoots the ball in any way and the ball does not go into the hoop.

Even if a player knows the ball isn’t going in out of habit may still yell “And-One”. This is to tell the referee that there is contact without telling them directly, as most ref’s do not like being told how to do their job.

The and-one must be in a shooting motion by the player attempting a shoot, as sometimes calls are whistled on the ground. Offensive fouls do not present and one opportunities, so no free-throws will be awarded. 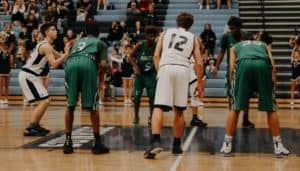 The Difficulty Of The And-One

Making any shot in the process of being fouled is no easy task but when you do you’re rewarded with one free throw. This can also be known as a three-point play or four-point play. Think of the and one as be rewarded a free throw for making the shot.

Taking a shot while being hit is no easy task,  it takes physical and mental toughness all while trying to finesse the ball into the basket. On top of that, while you are getting hit you are also avoiding your shot from getting blocked all at once.

It is the toughest shot in the game that in my opinion has the most reward for how low the percentages of making the basket are. Even if you don’t make the basket you’re awarded free-throws because you were fouled.

A lot of players will try and purposefully draw fouls, I think this is a bad idea unless you can draw obvious fouls and are good at doing so. When you rely on a shot attempt to be called a foul you have it backwards. A better approach is to draw contact but expect no foul this does one of two things. It keeps your emotions in check as you don’t expect any calls. Secondly, it allows you to focus and concentrate on the shot instead of drawing contact first and then shooting the ball.

Leave it the pros to draw fouls, you don’t even get half the calls you are supposed to in a game. So why would anything else change. I see players all the time purposely throw their arms into the defender and yelling trying to draw contact, sometimes it works most times it doesn’t.

Again expect no calls, And-Ones don’t happen very often in a game, and while the next time you are out playing, ask yourself how many times on average do you usually go to the line in a game. I bet not many. 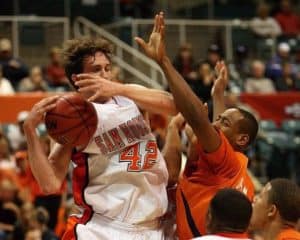 Examples Of An And-One

A clear example of And-One is a player beating their man off the dribble and going to the basket on a layup while drawing contact as the player jumps to block the layup attempt. In the process, the defender who gets beat or any defender who helps on defense fouls trying to block the layup attempt. The ball makes its way into the basket and the player hears the whistle and heads to the free-throw line for an easy free-throw shot.

This is the most common And- One you usually see in the game of basketball, it is surprising to me there is no and-one statistic. But what is counted is the field goal if it is made, but if it isn’t made the field goal will not count towards shots taken.

A second example is a player in a triple threat position at the three-point line looking to make a move. When the player with the ball is heavily guarded by the defender, the player may choose to swing his arms at the defender’s arms that are reaching in for the ball and lock the player’s arms in the process while shooting, creating the obvious foul.

Many times you will see players trying to kick out their leg at the three-point line to draw contact. The player would fall to the ground after releasing the ball, and every shot would go to review . The play would end up going to video review while this also slowed down the game.

It ended up being a major concern, so the NBA reviewed their rules on players drawing fouls while shooting 3-pointers. The issue was apparent, players shooting the ball at three-point line were sticking out their legs to draw contact on the defender contesting the shot. The rule was changed and players who do this will be charged with an offensive foul.

You can thank Reggie Miller of the Indiana Pacers back in the mid-1990s for that move until James Harden adopted it and made it an obvious issue. Not knocking Harden he is one of the best scorers of our time, who can get to the free-throw line anytime he wants.

And -One Trash Talking

The And-One is a subtle form of trash-talking your opponent, being able to yell that out without directing it to anyone is going to annoy your opponents, plus you can get away with it. Trash talking in a basketball, in general, is forbidden in the rule book and can lead to a technical foul. So if your you make a tough basket and you feel the need to express yourself because your excited yell out And-One as loud as you can.

Well, that concludes the article hopefully you learned something new check back here often as I always have new content posted on a regular basis.